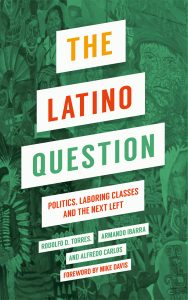 The Latino Caucus of the American Political Science Association has chosen CLS Director Armando Ibarra’s co-authored book The Latino Question: Politics, Laboring Classes, and the Next Left for the 2019 Best Book in Latino Politics Award.  The caucus will recognize Prof. Ibarra and his collaborators, Alfredo Carlos of California State University Long Beach and  Rodolfo Torres of the University of California, Irvine, on August 29th at the American Political Science Association’s Annual Meeting in Washington, D.C.  In its letter announcing the decision, the Caucus praised The Latino Question for outlining an empire theory of migration and challenging analyses that view people of Latin American descent in the United States as a single, unified voting bloc.  “By using a political economy lens to analyze the position of Latinos in the US,” the reviewers note, “this work helps readers understand the link between Latinos and the globalization of the capitalist economy.”  Prof. Ibarra is an Associate Professor with the School for Workers and has taught for the Chican@ & Latin@ Studies Program since 2011.