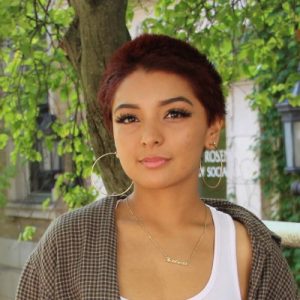 The Chican@ & Latin@ Studies Program is delighted to announce that senior Student Stephanie Salgado Altamirano has won this year’s Jesus Salas Academic Activist Scholarship.  A vocal leader in grassroots movements for climate justice and immigrant rights, Stephanie is pursuing a BA in Environmental Studies and Political Science with certificates in public policy and Chican@ & Latin@ Studies.  At the age of 17, she began leading and speaking at demonstrations, and she has gone on to co-found the local Youth Climate Action Team. In 2019 and 2020, she served on the Governor’s Climate Change Task Force, and last year she completed an internship in the office of Lt. Governor Mandela Barnes.   Stephanie has also shared her family’s story of immigration from Honduras with the Madison community through the Green Card Youth Voices project.  Stephanie takes inspiration from the example of the Lenca environmental activist Berta Cáceres, who was murdered in Honduras for her work defending a river from a dam project.  “I come from a community of resilient and loving people,” Stephanie said, “who despite poverty, violence, and corruption, … believe in looking out for one another by choosing love.” Stephanie hopes to continue working for climate justice after her planned graduation in December, 2022.  ¡Felicidades, Stephanie!

The Jesus Salas Academic Activist scholarship is awarded annually to a Chican@ and Latin@ Studies Program Undergraduate Certificate student who has excelled in academic pursuits and has made outstanding service contributions to the Chican@ and Latin@ Community. The award is named in honor of longtime activist Jesus Salas for his continuous commitment and dedication to the advancement and wellbeing of the Chican@ and Latin@ community. Regent Salas earned a Master’s degree in Political Science at the University of Wisconsin Madison, and in 1964 he helped found the Obreros Unidos, a Wisconsin agricultural labor union. He was also the first Latino executive director of United Migrant Opportunity Services, Inc. He served on the University of Wisconsin Board of Regents from 2004 to 2007, and was an instructor at the Milwaukee Area Technical College for many years.